The rally for Ruby Ridge fired, the Darigold Dozen 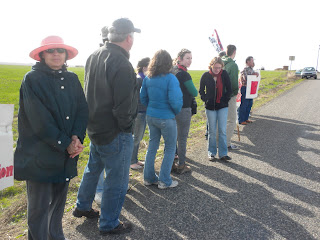 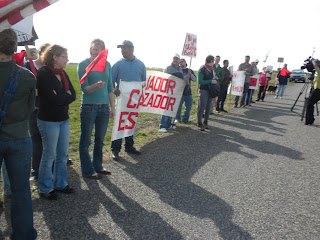 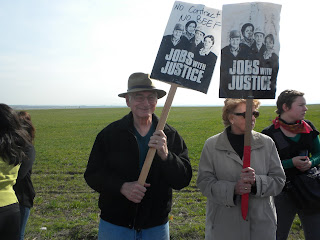 I was born in the 20th century and reached maturity then too. A recent college grad, born also in the 20th century but reaching adult in the 21st, referred to me as "20th century" when commenting on my lack of skills with technology. Well, I try. If a tool appears to have value to me, I learn it. For instance, I had no interest in texting until I learned my daughter would respond to me promptly when I do. So now I text to keep in touch with my kid.

All this is prelude for the fact that 1) I am going to post pictures from the rally for the Ruby Ridge fired workers, the Darigold Dozen, the brave men who stood up for their rights as workers and were fired thereafter for other reasons, the owners allege. RIGHT. Just coincidental, is it, that all of the fired workers were the ones leading the unionizing effort?

and 2), to find other blogs relating to workers, union rights, immigration issues, dairy workers, and human rights and put my 2 cents in there. I am not fluent in Spanish so I will do what I can in English for these men and all the other workers who will benefit if these guys succeed.

If you have ideas to help these workers, please pass them along (and do them as well!)