We know what is going on in Iran is wrong because the government is not letting the press report it.

In other undemocratic countries the press seldom have free reign, but they aren't shut down altogether, either. So the government in Iran shuts down the press, so people can't find out what is happening, and they are beating up or killing people who do anything to oppose the government.

I know my perspective is American, and I have always lived in a country with a free press. I know also that while the government makes a lot of mistakes, I have the freedom to criticize it, without fear for my health, safety, or family. I know not everyone has this perspective.

But I cannot imagine any perspective that would think it right for a government to harm its people for peaceful actions, and the shutdown of the press means they are hiding something.

They are not hiding their light under a bushel basket. They are hiding what they are doing because they know it's wrong, too.

Molly
Posted by Molly Dove at 3:35 PM No comments:

Email ThisBlogThis!Share to TwitterShare to FacebookShare to Pinterest
Labels: iran, the press

My thoughts go to other countries today.

Cuba - today I watched a documentary called "the Power of Community - How Cuba Survived Peak Oil." And I watched Cubans who have much to teach to their neighbors to the north.
Japan - today is the anniversary of the 1995 expression of remorse for World War II from the parliament. Japan was our enemy and is now a powerful trading partner. Ditto Germany. When will it be Cuba's turn?
Iraq - today state flags are at halfmast because another one of our citizens has died on Iraqi soil in the military conflict there. I grieve his death, and pray we can soon end the suffering and begin in earnest the healing and reconciliation the region so badly needs.

One of the Cubans advised, "think globally, act locally." So I will. Another letter to the editor (at least more than 2 people will read it), and some prayerful contemplation. Then more local action, but what they are I don't yet know.

Molly
Posted by Molly Dove at 4:05 PM No comments: 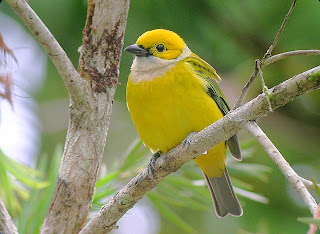 This bird -- silver-throated tanager-- is my desktop wallpaper this week. It takes my breath away when I see it. I can't feel the heat and humidity of where I first saw this species. I can't hear all the other jungle sounds. Still it awes me.

Peacemaking proceeds even slower these days. Maybe I am like a plant, and right now I am growing deeper roots rather than bearing fruit.

I am amazed recently at all the connections I'm noticing between the fictions I'm reading lately and the ideas and situations in real life. Bio-hazards. The meaning of America. The importance of training and drilling, so we'll know what we need to do when the time comes.

Maybe peacemaking is slower because I am reading so much fiction lately and it fills my head. Guess I'm reading a little too much.

Today is the 20th anniversary of the Tiammenen (sp?) Square face-down of pro-democracy activists and the Chinese military. The Chinese military squashed the protesters. I thank God America's military cannot participate in internal affairs. Glad to live in the USA.

Maybe my focus will return soon.

Posted by Molly Dove at 2:02 PM No comments: