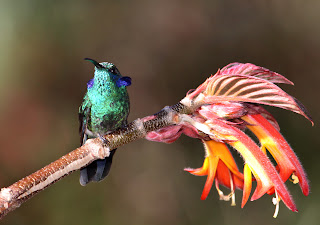 Violet-eared Emerald - awesome, huh? This picture was taken by Greg Prelich, a very good photographer and decent guy on our Costa Rica trip in the Spring.
I like the Quaker connection to Costa Rica. The Q's from Fairhope, Alabama moved to Costa Rica in the 1940s or 1950's. They were delighted to move to a country that had no military. Their trip was arduous. They bought some land they named Green Mountain, or Monteverde, as it is known today. They also bought a large chunk of land and made it a preserve. And, they introduced cheese making to the area. The dairy and cheesemaking continue to this day, as does the Meeting. The area still has a number of Quakers. And today Costa Rica has a huge number of preserves and national parks. I don't know if Monteverde's was the first but it was certainly among the first. And now the people in Monteverde and nearby Santa Elena have opposed the paving of the road up to their lands, because there are too many traffic problems there already!
Peace, y'all
Molly
Posted by Molly Dove at 5:24 PM